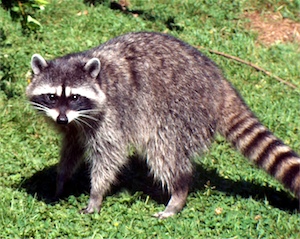 We had an interesting morning.

A squirrel recently moved into our house, between the first floor ceiling and the second floor floorboards. We didn’t know what it was, of course, only that my husband, Aaron, was hearing loud, scrabbling footsteps overhead while he was at work in his office. So we called Paul, a local animal removal expert, to help us re-home the critter.

Paul worked out where they were getting in, and set a “live trap.” It’s like a little cage, and the critter goes in to get the food but their weight triggers a door to fall shut behind them. Scary for them, I’m sure, but then Paul releases the animals into a more appropriate setting.

The first attempt at live trapping failed. Apparently our garage (attached to the house, but with no door into the house) is home to mice as well, and they stole the food without triggering the trap. So then the live traps were set outside, one on the fence, one on the garage roof.

On the garage roof, we did catch a squirrel. My daughter and I drove home one night from swimming or choir or piano or who-knows-what, and saw it up there — a poor, wee black squirrel going absolutely frantic. It was heartbreaking.

It was also coming on nightfall, and terribly cold and windy. We called Paul, and he said he’d come by in the morning to collect it. It would be fine overnight, he promised.

Sure. Probably. But I wouldn’t like to be in a cage, on a roof, in the wind.

Aaron pulled our ladder out of the garage and climbed up to bring down the squirrel. We left it in the trap, but set it in the garage, out of the wind, and draped a beach towel over the cage for warmth. I’m not sure what Paul thought, when he came to collect it and found “hotel squirrel.”

Paul took the squirrel to its new home and set the traps out again. This time, my daughter and I watched in delight as a bird entered the trap and enjoyed the food without triggering the door release. Clever!

The next bird wasn’t so lucky. That was last night, and Aaron climbed up on his ladder again and released the bird. My daughter and I cheered when it flew away. There was no bait left, so the trap sat empty.

Paul came by this morning. He thinks that the squirrel we caught was the one who had moved in. There haven’t been any more rustlings or scrabblings between the floors. He sealed up the opening where they had gotten in. And then he asked us a favour.

Would we consider loaning out our garage to a family of raccoons overnight?

He had caught a mother and her new babies earlier this morning. My brother had a raccoon family in the attic once, in his old house. Based on his story, I was impressed that Paul didn’t look like he had gone three rounds with a furry, clawed Mike Tyson.

These babies, Paul estimates, were only born Monday. He had warmed them up and given them some milk, and he brought them into our house in a little thermos lunch pail, which our daughter was happy to guard from the dog. He was — is — going to release the family into the local Lynde Shores conservation area, but this morning it was still too cold. He wondered if they could spend the rest of today and tonight in our garage, to get the family settled together again. Tomorrow, later in the day, he’ll come by and bring them to their new home.

We gathered some old towels and cloths, for Mama Raccoon to build into a nest. Paul got her settled, then dropped the tiny, bald, squirming babies in one by one. There’s a can in there, too, which Mama Raccoon will apparently open later and have for a snack. I didn’t know raccoons could do that.

So there’s a raccoon family in our garage now, nestled into old towels in their cage, covered up by Noah’s Ark bedsheets that date back to when my brother and I were kids. And my daughter is absolutely delighted to play host to a raccoon family, and I’m sure her friends at school are hearing all about it, even now.

And this has absolutely nothing to do with writing, except that it’s cool. It’s the sort of thing that would make a good picture book, if one felt inclined to play fast and loose with the facts. There, see? Always a writing angle.

I expect that later tonight, we’ll be having a talk about why wild animals (particularly raccoons) don’t make good pets. That one’s a bit of a family legend, since my mother and her siblings adopted a baby raccoon once, back in the early fifties. Eventually “Rocky” had to be rehomed, just as our overnight guests will. Maybe we’ll call up Grandma and let her tell the story herself.

We’re not going to have much to do with the raccoons. They’re better left alone, I think. We’ve given them a warm, safe place, and now we should stay the heck out of their business — much as it would be tempting to go take pictures and ooh and aah over the babies. I’m not even going to take a picture for this blog post — an Internet raccoon will have to do.

But my husband did take a video, as Paul was setting them up in our garage. You can see it here. Don’t mind the mess. The old-fashioned blue bicycle in the background is mine, and her name is Sadie.

So there you have it. Now my family has our own raccoon story to tell.

I hope it has a happy ending.

2 thoughts on “Raccoons! And Other Animal Adventures”