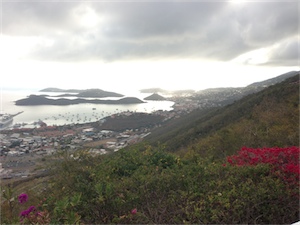 Guess where I was earlier this month!

You’re jealous, aren’t you? I don’t blame you. I’ve been feeling jealous of trip-Erin, too, this past week while it’s been blustery and damp and cold. Shovelling heavy, wet snow. Driving my daughter to choir practice in an impromptu blizzard. Working through mountains of laundry and folding shorts and tank tops that won’t be worn again for months.

But the snowdrop flowers are up in my garden, so I know it won’t be long now before the snow disappears.

I wouldn’t trade it, though. I like having seasons. And St. Thomas, lovely as it was to visit, is not somewhere I’d want to live. (Even putting aside the logistical difficulties of going through an entire bottle of SPF 8000 sunscreen every three days and wearing a hat the size of a satellite dish.)

It would make one heck of a setting, though. Here is some sunny-weather fuel for you writerly types. 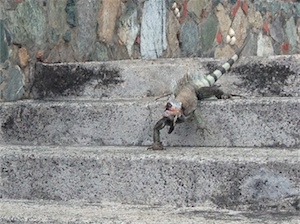 Lizards. Iguanas are everywhere. Like squirrels! And little geckos, too, which are breathtakingly cute, but it was the big, clumsy, bearded iguanas that we really loved. Except maybe my mother-in-law, when one of them fell out of a tree and nearly landed on her head.

The lizards are important, though, because they help control the bug population. And St. Thomas has some nasty bugs, including scorpions and tarantulas. We didn’t see any of those, though. Except maybe that one thing that might have been… never mind.

Anyhow, the security guard at the airport told my daughter that the tarantulas only come out at night. They only tend to see them in the morning, on the road, if one got squished by a car. And I want to feel sorry for the poor little tarantulas, I do, but I’m really struggling with this one.

There was a teeny gecko lizard hanging out on the ceiling of our bedroom one night. I was happy to see him there. 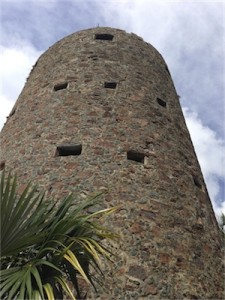 This, apparently, was Blackbeard’s lookout tower. My husband and I climbed it and looked out through the wee windows all around. Some nice girls took our picture together.

There’s a beautiful beach at Magen’s Bay, but that’s not why the pirates showed up. Magen’s Bay is a lovely, deep natural harbour. And back in the days when Pirates of the Caribbean meant more than just a Johnny Depp vehicle, St. Thomas did a roaring trade in Jolly Rogers and buried treasure.

Or so goes the line in the tourist shops.

St. Thomas makes a big deal of its pirate-y past, because that sort of thing plays well for visitors. There’s another history, though, and it’s a dark one; St. Thomas was a slave trading port. So this was the place where, when families were brought over from Africa, they were split up and sent their different ways.

There isn’t so much about that in the touristy places.

We ate at a fancy restaurant one night. It used to be a plantation. There weren’t a lot of them on the island; St. Thomas is very hilly and not great for agriculture. Not like St. John, next door. But there were enough low-lying lands that there were some plantations, and there are a few colonial-style buildings left from that time.

Anyhow, eating at the plantation was a strange, split experience. I kept looking around and trying to see it the way it was before, and thinking about what that would have meant for the different people involved.

It was hard to get at the island’s history. My husband and I went on a walking tour, but it was a bit jumbled, and a lot of the places that were posted as museums turned out just to be shops inside old buildings. Maybe that’s what most visitors are looking for. A few hours off a cruise ship isn’t enough to get the feel of a place. A week isn’t either. Not nearly. 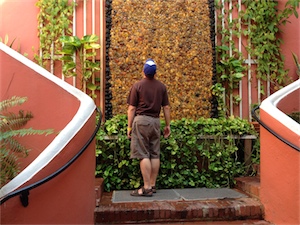 Amber. I saw some beautiful things, and learned some cool stuff. There’s an amber waterfall there, the biggest in the world, we were told. It’s two stories high. This is my husband standing in front of it.

The amber museum was actually one of the most interesting stops. The guide there was a lovely woman who knew lots and was happy to share it.

Some of what she told us wasn’t even about the Caribbean, exactly. Apparently there was an Amber Room in Russia, in the palace of Peter the Great. After World War II, the room was looted and most of the artifacts went missing. There were a couple of replicas in the amber museum, which was what prompted the story.

She gave me a large piece of amber to hold, and pointed out how light it was–like plastic. “These things show up at yard sales,” she said. “Keep your eyes open. You never know.” Apparently there are huge rewards for the return of the artifacts, and people who have invested years in searching for them. So there’s a story starter. Go ahead. You’re welcome. 🙂 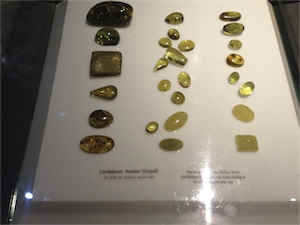 Something more scientifically interesting was that the Caribbean is one of the only places where green amber is formed. Usually, different colours of amber come from inclusions or from the different types of tree sap that fossilized. Maple trees, apparently, create a rich, red amber. Yay, Canada!

But in this case, the green colour comes from a chemical interaction between the tree sap and volcanic ash, as the amber is forming.

The amber museum was fabulous. There was a dinosaur footprint there, in amber. I loved that! And there were some giant, crazy pieces of jewellery-meets-art, which were interesting to look at but I can’t imagine anyone actually wearing. Probably that’s not the point of them.

There was a giant bee sculpture made of amber, which I tried and failed to get a good picture of for my sister-in-law. And something I though was quite beautiful, a sculpture of the Nina, the Pinta and the Santa Maria, all sailing on a glowing amber sea.

We’re back with the tall ships now, and the pirates. I do like pirates, as long as they’re safely in storybooks. 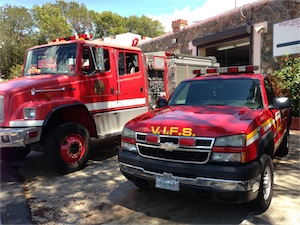 A Dry Island. My brother is a firefighter. So when we saw the fire station in Charlotte Amalie, I had to go take pictures of the trucks for him. Aaron and I ended up talking with some of the firefighters there.

In St. Thomas, after a certain point up the mountain, there’s no water supply. The lowlands have  hydrants, but for all the villas up high were the views are so beautiful, water supply is dependant on rainfall. Instead of basements, houses have giant cisterns where rainwater is collected and saved. That’s what comes out of the taps and showers, what flushes the toilets. You have to be careful not to use too much, especially when you’re there just after a dry spell, as we were, because you can’t know how long it will last.

As you can imagine, this presents a problem for firefighting.

My father-in-law, a contractor, pointed out that there’s not much in the villa we stayed in that would burn. The furniture, certainly, but all of the walls were concrete. Even so, there had to be an answer. I asked.

They drive the water up. Giant trucks, heavy with water, on those twisty, windy, mountain roads. If there’s a fire on the mountain, water trucks from all the fire stations on the island come (there are four, I think they said), and they take turns running for water.

They also use a chemical fire suppressant mixed with the water, which starves the fire for oxygen and makes it so they don’t need as much water to put out a fire.

Also, because this is a tourist island, they had United States Virgin Island Fire Department t-shirts for sale. In the fire station.

I bought one for my brother. Why fight the inevitable?

That’s all the St. Thomas info for now. But if winter lingers, I’ll rummage through the beach photos and come up with another blog post!