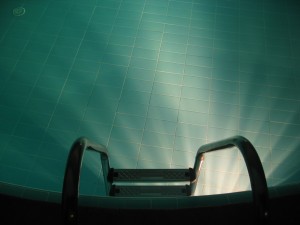 A funny thing happened with my daughter last week. It has me thinking about characters in kids’ books, and the things they do.

So here’s the story. Class started up again last week, and as it happened, I was busy in Toronto that night, so my wonderful mother came to the rescue and drove Sarah to swimming instead. Once they were suited up, Sarah and her friend, also a strong swimmer, made their way from the locker room onto the pool deck and looked around for their new class.

There are six lanes in the large pool at the local swimming complex. The first two had younger kids in them… or so Sarah decided. The other four lanes had older kids. That looked more promising. Sarah and her friend joined the big kids.

Did I mention that my daughter and her friend are also very tall for their age?

To make a long story short, they invaded the senior competitive team’s swim practice. So not only were these kids regular, experienced, competitive swimmers, they were also several years older.

Sure, these older kids were better and faster. And yes, it was a problem, having two slower swimmers in their midst. A big problem — Sarah and her friend ended up being given a lane to themselves, which worked out great for them, but wasn’t so wonderful for the other, already-overcrowded senior swimmers.

Sarah and her friend were hopelessly outmatched, of course, but they were tall enough and managed well enough with the lengths and exercises that it never occurred to the coach that they actually belonged in the pre-competitive class a couple of lanes over. And it never occurred to Sarah and her friend that they were in the wrong place, either. That’s the part I find interesting.

That tells me that a kid can be in completely over his or her head, and still muddle along. It tells me that it’s not so far-fetched to write about kids who think they can be detectives, or spies, or rocket scientists — not someday, not when they’re grown up, but right now, in the moment of your story. The thing is, kids don’t see themselves as little. They don’t see themselves as too young, or too small, or incapable. As far as they’re concerned, legal driving age is a mere technicality — give them a chance, they could win the Indy. How hard can it be?

The swimming mess is all straightened out now. Sarah’s back in the pre-competitive level where she belongs. Those kids aren’t really so much smaller than her, not really. Not to my eye. A lot of them look to be her age or even older, given the crazy giraffe height thing my daughter has going on. (She didn’t get it from me, that’s all I can say.) And yeah, she passes them in the water a lot of the time, but not always.

Put your characters in the wrong lane. Put them with the big kids; put them where they can’t keep up. See if they swim.