On March 8, I’ll be doing a two-hour presentation for the Writers’ Community of York Region on what authors can learn from Hi-Lo books. With more demands on our readers’ attention than ever, it helps to have techniques (and a mindset) focused on keeping them reading.

Hope to see you there!

This Sunday, I’ll be joining my fellow Orca Hi-Low authors Paul Coccia, Melanie Florence, Karen Krossing and Patricia McCowan at a signing/book promotion event at Chapters Vega in Mississauga. We’ll be there to sign our own books, yes, but ALSO to act as “I Read Canadian” shopping guides to anyone who would like some help finding a great book! I’m a “Book Matchmaker” at heart, so I’m looking forward to this event! If you’re in the area, please stop by and let me help you find a great new Canadian book!

This weekend, along with many of my fellow HiLo authors from Orca, H.I.P, Lorimer and other publishers, I’ve been trying to build some awareness online around books for reluctant readers and why we love to read and write these books.

What the Heck is a HiLo?

Whenever you write for kids, there’s a bit of a disjoint between the age of the character and the age of the reader. Readers tend to want characters to be a bit older than they are. This isn’t a hard-and-fast rule, just a guideline.

So basically the math on that is, if the book is written for a kid in grade 6 and written at their reading level, the character is in grade 7 or 8.

Now think about a kid whose reading level is lower than their grade level… say a sixth grader who reads at a third-grade level. Are you going to give that kid books that were written for third-graders, featuring younger characters and plot lines that aren’t a fit for the sixth-grader’s maturity level? That might not be the best way to hook this kid on reading.

These books (called HiLo, Hi-Low or Reluctant Reader titles) are written at a more accessible reading level, while still featuring age-appropriate plot and characters. In other words, a HiLo for that sixth-grade reader will feature characters in grade 7 or 8 and a plot that appeals to that age group, while controlling the reading level to the point where it’s easy, inviting and fun.

This is an oversimplification, of course. The math is never that clean, and a reader’s needs are not that cut-and-dry. But the point is, HiLo books help make relatable characters and exciting plots available to everyone.

Short answer? Everyone. I am not, and never have been, a reluctant reader (much to the consternation of my parents, who didn’t understand why I needed to be reading a book as I walked to school). I love these books. Like picture books, they pack a big bang for their size.

These books are fun, fast reads for advanced readers. They’re also accessible reads for readers who are struggling for any number of reasons–learning difficulties might be at play (some HiLo books are being released with a dyslexia-friendly font, which is a wonderful development), English might be a second or third language, or the person just might not be a reader yet. (Someone online once proposed that these books be described as for “discerning readers,” rather than “reluctant readers.” There’s something to that. As a kid I would read pretty much anything between two covers. My brother, not so much.)

At risk of stepping in to iffy territory, I sometimes describe these books as a gateway drug for reading. The idea is to match the right book with the right reader, so they can have an enjoyable reading experience. And then, if you’re really lucky, they might come back to the parent or teacher or librarian who gave them that book, and ask for another one. And another one. Wouldn’t that be wonderful?

Some time ago, a student and friend in the Creative Writing course that I teach at the Oshawa Senior Citizens’ Centre shared with me some letters that she had found when she was a young girl. She knew of my interest in all things historical, and particularly in the WWI era — one of my current works in progress is set just after, in 1919.

These letters were in the attic of a house that she and her family moved into. She had puzzled her way through them over the years, and taken them with her from home to home. I understand and share her fascination with them — the letters are a small window into the past. Even the yellowed paper and faded, flourish-y handwriting speak of a different era.

The letters belonged to a Ms. E. Shand; most of them were written by Canadian Nursing Sister Lena A. Davis, who was serving in Greece.

We decided to work together to find a good home for the letters.

Soon, thanks to the Canadian Letters and Images Project (overseen by Dr. Stephen Davies at Vancouver Island University), the letters will be available online for historians and researchers.

I’m happy to have had the chance to be part of their journey, and look forward to sharing the links when the letters are online. Who knows? There may be a story in this yet… although I’m not sure I can juggle another manuscript at the moment!

This Saturday, I’ll be joining four other members of the Orca “Pod” to talk about our beloved hi-lo (reluctant reader) books, share readings, and sign copies. It promises to be a great event! Please join us if you can!

It’s always a happy day when a book gets reprinted. I recently heard from H.I.P. Books that Roller Coaster has gone back to press again. It’s my shortest book to date, and the one aimed at the youngest readership — reluctant readers in around grade 3.

It was a lot of fun to write. I got to design my own amusement park from scratch — and then burn it down!

I drew a map of the park, so that I could keep locations straight (directions never having been a strong point of mine). Then I brought the map to my firefighter brother and we talked about wind direction, where the fire might start, and how it would spread. 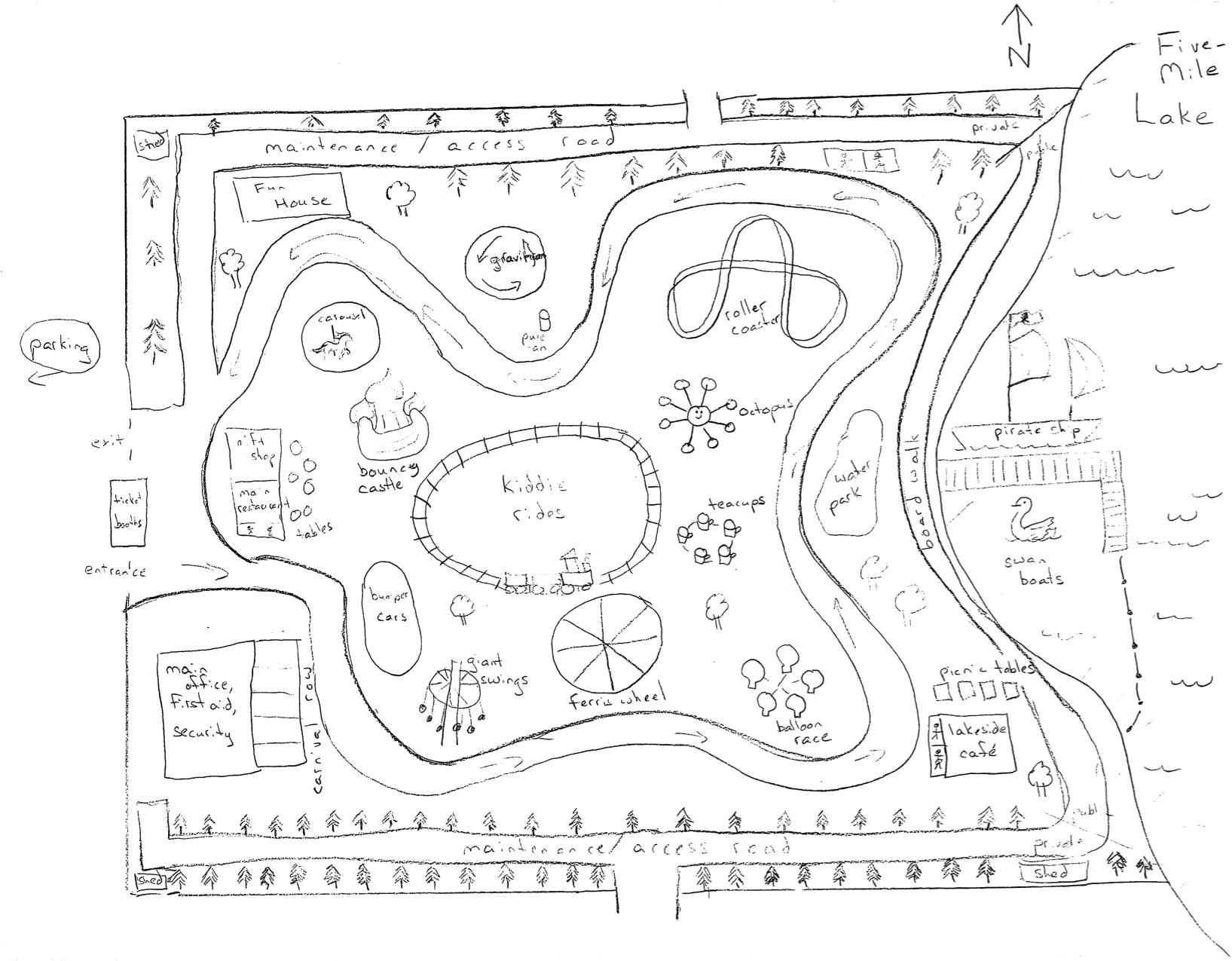 I hope I’m “realistic but ready” for this talk! Looking forward to meeting everyone. 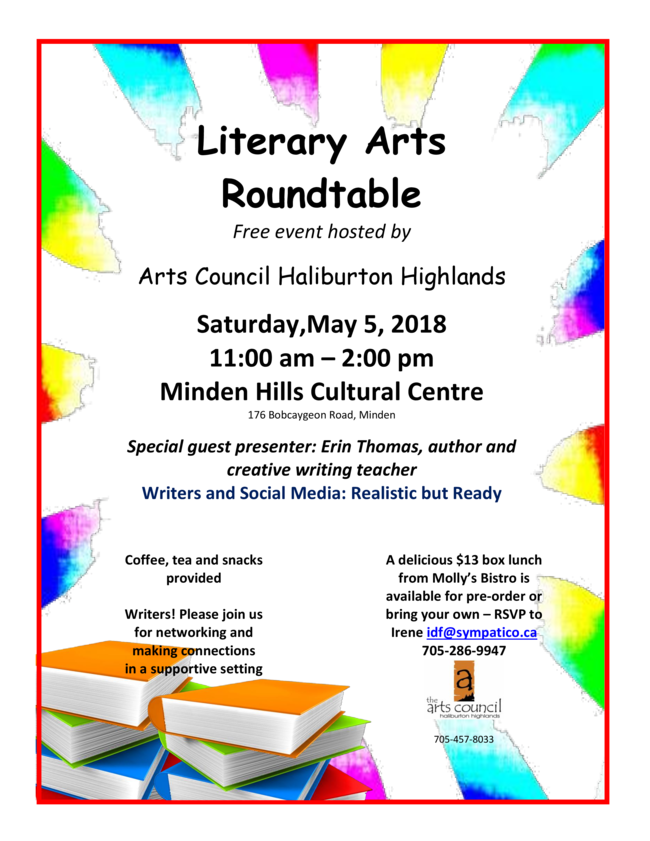 Irony is fun. I haven’t updated my blog in a while, but I’ll be speaking with the Arts Council Haliburton Highlands on the topic of authors and social media next Saturday. My relationship with social media is, well, complicated, to use the Facebook term.

On the plus side, life is becoming less chaotic. The past few months have included times of mourning and times of celebration for my family. Close friends have gone through loss and illness. There has been chaos on the home front, with the Basement Renovation that Would Not End. Writing slowed to a halt, and it was all I could do to juggle parenting and teaching commitments.

Some months are just like that. Sometimes all you can do is duck and cover.

And then things get better. 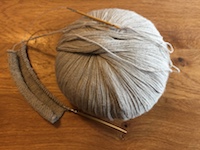 I wish I could find the diagram she’s talking about. It rings true for me, both as a knitter and as a writer.

My daughter writes with joy and abandon, typing away and happily obsessing over her characters and her story ideas. Then she gets a shiny new idea and abandons the old one, going off to write something else. That’s the way it should be; she’s fourteen. Her job as a developing writer is to play, to make pictures in her mind and practice putting words around those pictures. She knows that eventually she’ll have to tackle the tough slog of getting to the end, if she decides to pursue writing for publication, but now is not that time.

I’ve written a few books now. I’ve had seven published, and have written to the end of a few promising drafts that I loved at the time, but didn’t get back to. In theory, I should know how to finish a manuscript. At the very least, I should remember what the hard parts feel like and how to navigate them. But I think there’s some kind of blocking chemical that might kick in, the way that they say that women never really remember the pain of childbirth — or we would stop having babies.

I think I’m at around the 30% mark with my current work-in-progress. Maybe only 10%, although I shudder to think that may be the case. Either way, I’m heading into a harder stage. I hit a pretty big ka-thunk last week, when I had written the stuff I could see, the part of the story where one thing flowed into another and I knew where things were going. Now I’m looking ahead; I have some milestones where I know more-or-less what needs to happen, but I don’t have a clear scene-to-scene plan. My writing work seems to involve taking stock of where my characters are at, thinking about what they want, and trying to figure out what the next thing is they might do. It’s not the end of the world (all writers must save that for act three, bwa-ha-ha), but it’s a long way from the easy flow I was in a few weeks ago, seeing clearly where my story was headed.

I’ve heard writers refer to the E.L. Doctorow quotation: Writing is like driving at night in the fog. You can only see as far as your headlights, but you can make the whole trip that way.

I hope there’s something to it.

Wow… this is taking longer than I first expected. 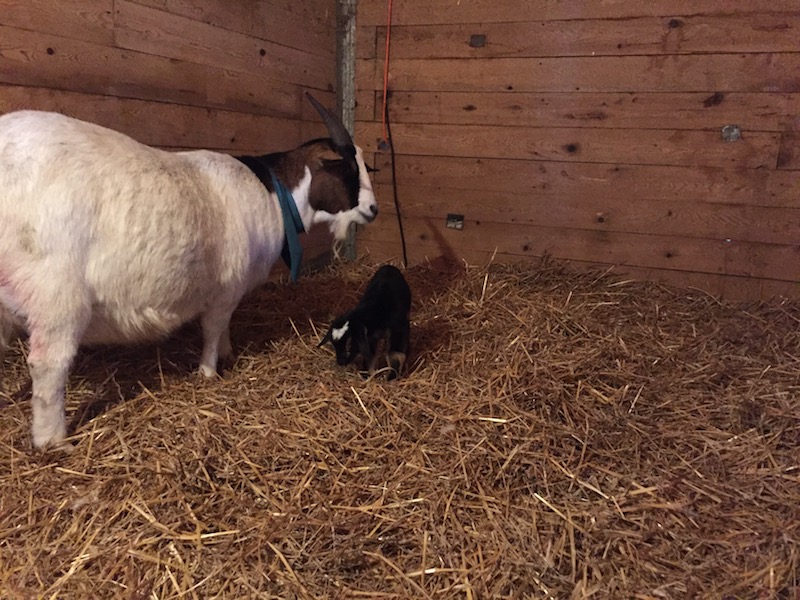 This has nothing to do with writing, except that sometimes research can take you incredible places. When my daughter expressed an interest in adding to her high school volunteer hours by becoming a “goat cuddler,” I figured that at the least, she would end up with an interesting line item on her resume. I decided I would be the parent of record for this one. After all, the parent who did the driving might get to cuddle a baby goat or two. And who wouldn’t want to do that?

The location is a petting farm nearby. The goats need to be handled from the time they’re small, so they grow up being used to people. As it turns out, it’s not really much of a hardship to spend some time snuggling with a baby goat. They’re very soft… like little, gawky teddy bears with hooves. The little fellow in the picture above is less than twenty-four hours old. I didn’t mind the adult goats, either. They’re friendly, curious little creatures who like to nibble on coats.

Daughter and I filled water containers and spread hay. We found some eggs — duck eggs and chicken eggs and one very large goose egg. We visited with bunny rabbits and guinea pigs, and oohed over the bright yellow ducklings. This was all useful; parts of my current story take place on a farm, and you can only get so far by reading about them. I loved being up close with the animals and the straw, paying attention to the smells and the sounds and the dimness of light in the barn. For the record, I get that visiting a couple of baby goats IN NO WAY qualifies as farm life, but it’s a tiny step closer than I was before.

But obviously, further research is needed. So we’re planning to go back next week. Writing. It’s a tough job, but somebody has to do it.