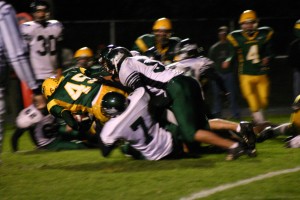 Last night my writing group critiqued one member’s middle-grade novel-in-progress. J’s novel is about a thirteen-year-old boy dealing with a truckload of difficult things–bullying at school, friendship conflicts, and a mother who struggles with clinical depression. In the current draft, near the beginning of the story, the mother attempts suicide. The boy is the one who finds her.

The scene has already been workshopped a few times. It’s gut-wrenchingly well written. There were a few tweaks suggested, but that wasn’t what dominated the discussion. The thing that bothers me, the reason the critique session sticks in my head, is that we spent a lot of time talking about whether the scene belongs in a middle-grade novel at all.

On one level, it’s simple. My knee-jerk reaction: “What do you mean? Of course it belongs!”

I like to see books that tackle difficult topics. Especially if, as is the case here, the writer is approaching them from a place of respect and understanding. Cheryl Rainfield, author of Scars (which has both won awards and been banned from libraries) is a good friend of mine. I admire her for the risks she takes in her storytelling.

But another group member brought up a valid point: would a middle-grade boy want to read about this? In a way, this points to an issue of balance. J is writing the boy’s story, not the mom’s. It’s a novel for kids. And so the trick is to avoid letting the mom’s depression take centre stage. The book needs to be about the boy dealing with his mom’s depression. And that shouldn’t be the only thing he’s dealing with, because as important as that is, it could very easily get a bit, well, lesson-y. That might be an issue book. There needs to be a story.

Another point was brought up: would a parent want their child reading this? And that’s where I get my back up. Very hypocritical of me, because I’m about as overprotective a mom as you’ll ever meet… but I tend not to hold Sarah back much when it comes to books. I think the right book can be a discussion starter.

I don’t think we can write the books that the parents want. Yes, easy for me to say — I’m about as edgy as a crumpled sock. None of my story ideas would likely even register on the librarian/teacher/parent alarm scale. (Although I did recently have my childhood piano teacher “slap my wrist” over some of the language in Boarder Patrol. I think the character says “crap” once or twice. Ah, Miss Breckenridge, I love and respect you, but you are not my target audience.)

I’m one of the lucky ones. I had a relatively happy, albeit nerdy, childhood. But a lot of kids are dealing with a lot of stuff, and to downplay these issues in books does them a disservice. I think that for a child who lives with a parent who deals with depression or another condition, seeing his world reflected in J’s book might help. It might help him feel less alone, might help him see that there’s hope. And maybe for another child, the book might offer a glimpse into a world that they don’t know. And maybe that’s part of where empathy comes from.

Anyhow, J, if you want my two cents’ worth, don’t downplay the scene. And don’t age the character. Not yet. Write the book and see where it takes you, and see what feels right. Your mind wanted the scene to run that way for a reason. Write the book now, and revisit it later, and change it only if it feels like that improves the story.

2 thoughts on “Tackling the Tough Stuff”