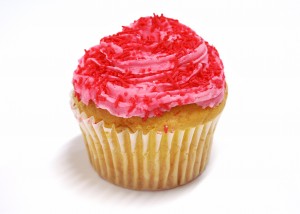 My daughter likes to lick the icing off cupcakes. A few swipes of the tongue, food colouring on her cheeks. Then she’s finished with it. “I can’t eat any more,” she’ll say, handing it to me.

It’s slick and shiny on top. Dampish. Not terribly appetizing.

We need a new cupcake strategy. But yummy treats aside, I want to look at her reading habits. She licks the icing off books, too. That is, she looks for the good parts. And if there are too many pages between those good parts, she loses interest.

Even Rick Riordan, who is something of a legend in this household at present (she zoomed through the Percy Jackson books and then delved into Greek mythology; now we’re in the beginning of an Egyptian phase), is susceptible to this harsh editorial doctrine. She devoured The Lost Hero, but her bookmark has been on page 152 of The Son of Neptune for a few weeks now.

I asked her why. She shrugged. “Not enough monsters.”

It’s something I try to be aware of in my own editing. Are there enough monsters, mythological or otherwise? Is the dialogue moving fast enough? Is it moving at all? Is there a point to the gosh-darned scene?

Each scene. Yup, every one.

And there’s no cheating allowed — you can’t start the scene too far ahead of where things move to that point, or let it linger on after the point has been made. And by point, I mean event or decision or goal-and-failure that moves the story forward.

If you were only allowed one sentence to describe what happens in your scene, what would it be? Give the scene a title like a Friends episode: the one where my character accidentally poisons his girlfriend.

I’ve heard the same good advice from two excellent teachers now: start the scene at the last possible moment, end it as soon as you can. Draft the scene and then start cutting from both ends. Cut until the scene no longer makes sense, then undo that last cut. That’s it. That’s all you get to include: only the necessary stuff. The good stuff.

I’m rewriting a juvenile novel now, and trying to be aware of the “only the good parts” rule. As I revisit each scene, I ask myself what it contributes to the story. I figure out what the point is, and tighten the scene around that. It’s something I struggle with. My characters talk too much. I like to know what they had for breakfast, and where every person is coming from and going to… but that doesn’t all need to be in the book.

Who will, of course, tell me it needs more monsters.