The funny thing is, Susanna Kearsley writes for adults, and until recently Kelley Armstrong did as well (I haven’t read her YA books yet, but I hear great things about them from Lena Coakley, and I trust Lena’s taste in books). I don’t have a lot to do with grown-up books these days, and Susanna writes romance books — not my genre at all. The thing is, the impact that Susanna and Kelley had on me had less to do with what they wrote, and more to do with who they are.

It’s a big deal when, as an aspiring writer, you get to feel a connection to a published writer. Any connection. Arthur Slade keeps a letter from Ray Bradbury on his wall. Nail Gaiman has talked about the influence Dianna Wynne Jones had on him, as mentor and friend. And for me, there was Susanna Kearsley. 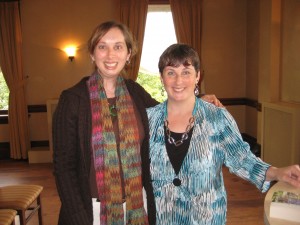 The thing is, she’s a local girl. Her mom and my mom worked together. And so when she had her breakout success with Marianna in 1993, I heard about it right away. I still have my dog-eared copy of that book. I loved it. I still love it; it’s a great story. It didn’t win the Catherine Cookson award for nothing. But for me, it’s always been as much a talisman as a book.

Susanna Kearsley was the first author who was a real person to me.  I devoured each of her books as they came out, not only for the characters and world building (which were incredible — now that I’ve had the opportunity to hear Susanna speak a few times and get to know her as a writer, I have a better understanding of the effort she puts into her immaculate research), but also because she was like me. And if someone whose mom worked where my mom worked could write books, then maybe, just maybe, someday I could do that too.

This was even before I had ever met her in person. I have now, and she’s every bit as friendly and gracious as I could have hoped. It’s always nice when that happens. 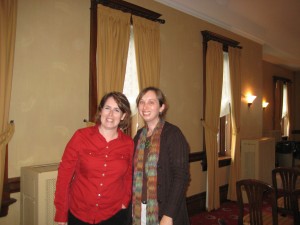 The first time I heard of Kelley Armstrong was when she came as a guest speaker to a writing course I was taking. I bought a copy of Bitten on the way home from the workshop, and devoured it that night. I was hooked.

I bought the book not because I thought I would enjoy a werewolf story (that part came as a surprise), but because I liked Kelley immediately. She was down-to-earth and approachable, and she talked about the life of a writer as much as the craft. She told us about things like training her husband and children to understand that a closed office door meant they should get their own dinner.

Nobody had ever talked about that part of it before, about the struggle to actually get things done and fit it around work and family and everything else. She had worked in IT, I worked in IT. She was a mom, I was a brand-new mom.

Kelley didn’t make it sound easy — that would have been a lie. But she talked about it in a way that was real, and I realized that if this woman, with three children and a job as a programmer, could make room in her life for writing, I could too.

Last week, when Susanna and Kelley came to Whitby, the topic of mentors came up. Susanna asked Kelley who inspired her. Kelley said the answer to that question has changed over the years. There were writers whose books she loved, writers she wanted to write like. Those were the writers who inspired her at first. But as her career has grown and she has gotten to know other writers, her inspiration has come from different places. She’ll admire one writer’s sense of suspense, another writer’s depth of character, and another writer’s work ethic. Some she admires for having overcome so many things in their own lives in order to write.

I understand that — the way it can shift and change, depending on what you’re working on or looking at. There are writers I love: Kenneth Oppel, Arthur Slade, Martine Leavitt, Meg Rosoff, Laurie Halse Anderson, so many others. I’d love to be able to write like them, but I think I’m most inspired by writers when I get a glimpse of their real lives, like Kelley and Susanna.

I don’t write romantic books like Susanna or scary books like Kelley. (And truly, to boil their books down to one adjective does them a disservice — their stories and characters are more complicated than that.) I’m learning, bit by bit, how to write books for kids. But I’m also learning how to build my life around writing, and the people who inspire me are the ones who are doing that in their own ways, every day. I know them through my writing group, or through CANSCAIP or the WCDR. They’re not all published, or published as widely as they deserve to be, but they remind me that writing takes effort, and that it’s worth it.

And when they try harder, I’m encouraged to try harder. I hope it works the other way, too. Because being part of a writing community of real people — that’s inspiring.

So here’s today’s question: Who inspired you? Who was it at first, and who is it now? And why?

3 thoughts on “Who Inspired You?”