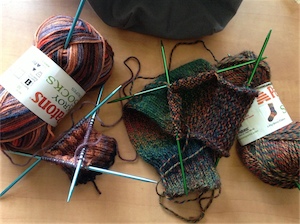 I’m learning how to knit socks. It’s still very much a work in progress. In the picture, you can see my two current projects. The one on the right is for my mom. She has knit me some lovely socks, which are on my feet as often as they’re out of the laundry. I figured it was time to return the favour.

The one on the left is for my long-suffering husband. Because he deserves some cheery footwear, too. 🙂

Why two projects? That’s easy. I ran out of things to do on the first one, at least until I can learn the next step; my good friend and knitting teacher, Jocelyne, lives in Peterborough. And I couldn’t start Mom’s second sock, because those knitting needles were all tied up in her first one. So, last night while watching Sarah’s choir practice, I started a second pair.

Starting another sock was a good reminder. That little chunk of knitting took me a good three or four tries to get started. Once I’ve done a round or two, I’m mostly okay, but getting it going is a bit tricky. I was proud of myself for getting that far; when I started the first sock, it took me weeks to get it to the point where I wasn’t tearing it out every second try.

It felt a lot more achievable this time. So I think this will be my strategy–learn something new on the Mom sock, then practice it (before I learn too many new things and have time to forget) on the Aaron sock.

I wonder if part of the reason why it felt more achievable was just that I knew it was. Because I had done it before. That’s what I’ve found with writing. Before I started writing for children, I had attempted the start of a romance novel. Apart from being terrible (first novel, and not really my genre, as it turns out), it’s unfinished. It felt like such a huge undertaking; I don’t think I even got halfway.

My first completed novel came about as the result of a novel marathon. I put myself in a position where I’d be forced to write to the end, and to write quickly, without overthinking it. It’s pretty terrible, too, although salvageable, I think. I might go back to it one day. But the thing that novel taught me, which kick-started my writing as a career, was that I was capable of finishing.

That’s it. Nothing fancy. It’s not published; it’s not even something I’d bring out to my writing groups, these days. Not without a lot of work, first. But after I reached the end once, I knew I could do it again, so I did, with another novel. And then another one. And eventually, they got to be a bit better.

I’m working the opposite way now; trying to slow down, and go for better quality in early drafts. But I can do that because I’m confident that, one way or another, I have the ability to tell a story from beginning to end. I know I can get there, because I’ve gotten there before.