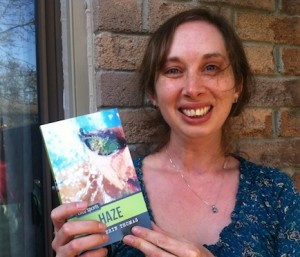 Last night when I got home from a very busy day, there was a package waiting for me. And inside were… books!!!

It’s always an exciting day when the book that you worked on so hard, and probably last saw in manuscript form several months ago, is suddenly real. A real live book! Right there, in your hands! It can be a bit nerve-wracking, too. Because now it’s really, really too late to make any last-minute changes.

Nevertheless, Haze is a real book now, and I have copies! And it looks great — Orca has redone the look of their Sports series covers, so it’s very schmancy and, well, sporty. Bigger picture and brighter colours than on my ARC. More exciting.

Exciting like all my adventures on yesterday’s road trip. What road trip, you ask? Well, the one that has me attempting to visit-in-person as many local bookstores as possible in order to offer free workshops, which is my current plan for promoting Haze.

You see, I’m not a well-known author. I’m a writer still in the early baby steps of a career. I’m not even remotely close to famous, except maybe to my mom. (Hi Mom.) So if I were to offer a reading or a book signing at a book signing, well, I’m afraid the biggest reaction I could reasonably hope for would be a collective shrug. And I’m okay with that, but it does make the whole promotion thing difficult.

Hence the free workshops idea. I’m going to see which bookstores would like to host one. The strategy here is that, after attending a workshop, some people might like to stick around and buy a copy of one of my books and get it signed. Some, probably not all. And again, that’s okay. Workshops are kind of fun, anyhow — who doesn’t like to talk about writing with like-minded folks?

The other side benefit is that I’m meeting more booksellers in the process. Booksellers are wonderful people to know. They can recommend books to you for fun reading or for research; they sometimes need authors for different events in-store; they’ll even carry your book, if it’s right for them.

My local bookseller is Shelley Macbeth at Blue Heron Books, and she’s wonderful. I’m afraid I wasn’t subtle when I introduced myself to her — I think I sent her an email asking about hosting a launch, and saying that I’d heard it was a good idea to get to know one’s local bookseller. She wrote back saying, yes, it is a good idea, come talk to me. When I did she proceeded to walk me through planning my first solo book launch. Which went very well.

So yes, Shelley is my angel, but I’m enjoying meeting more of these wonderful, book-passionate folks. Let’s face it — these days, one does not enter the bookselling business for the money.

So yesterday. Yesterday, I drove to Waterloo and attempted to introduce myself to the people at Words Worth Books. First I went to the wrong place. It turns out that King Street in Waterloo is quite complicated. It starts out as King Street West, then King Street East, then King Street South, and finally King Street North. I didn’t read the fine print and ended up looking in either the King West or King East area, I forget which. Bit of a sketchy neighbourhood, actually, and I was confused when I couldn’t find the bookstore, but figured I’d park and then take a closer look on foot. I drove around a few blocks a few times, and finally found a metred spot. Since I needed to use the, ahem, facilities by this time, I stopped in a tea shop.

After that, back in the main room, there was a very loud, very bearded gentleman who was sure he knew me. “Hey, how are you doing? It’s great to see you! You come in here all the time, right?”

Since I wasn’t sure where I was, I couldn’t agree. He asked me a lot of questions, very loudly, and I answered as politely as I could, very quietly. By the time we were done, he knew that I was from Whitby, that I was on my way to a bookstore, that I wasn’t a Waterloo grad but my father was, and I’m not even sure what all else. And I knew he liked the tea shop because they were good folks there and that it was great weather we were having, but colder than it had been, and his name. He said he hoped I found something good to read, which is about the nicest thing you can wish for a bookavore. It was a little overwhelming, but he was friendly, at least, which is always nice in a new town.

And then he left and I took my tea to a table, and pulled out my iPhone to double-check which way it was to the bookstore. And it turned out the bookstore was three kilometres away.

So… tea to go, and a bit of a drive farther along King Street. Up into the Souths. When I first drove past the store, I caught a glimpse of cardboard boxes in the window. Worrisome, but not the end of the world. I found a parking spot and checked their website, which said they were moving a couple of doors down. So it was still only a few blocks to walk from the parking spot. Except that when I found the new location, there was a sign on the door saying to please come back tomorrow, as it was moving day.

They were inside, and they were kind when I knocked on the door and stammered out something about not being able to come back tomorrow as I had driven from Whitby that morning. I didn’t want to bother them, so I very quickly left the papers I had prepared and retreated back to my car. It wasn’t much of an introduction, really, but at least they were friendly. I’ll call them back later in the week, once they’ve had a chance to settle in.

And then on to Guelph. I took a few detours getting there, but made it eventually. Guelph felt more homey to me than Waterloo did. Maybe it’s just not as big, or as sprawling. I’d also been to the university a few times, since a close friend and my brother both went there. And it reminded me a little of the area around McMaster, where I went to school. Of course, I had no car back then, so navigating parking spots wasn’t an issue.

In Guelph, it was. Luckily for me, there was a large lot right beside the bookstore, only partially full. I missed the entrance the first time around, but went back for it. And then it turned out that it wasn’t city parking, but rather for the Royal Bank. Clients only.

This was probably a cheat, but I happen to be a Royal Bank customer, and I had a cheque in my wallet that I needed to deposit. So I parked, went in and used the bank, came out the other door, and went to the Bookshelf Cafe. Sorry, bank people. But your lot wasn’t even a third full, and I was afraid of getting lost again.

What a bookshop. I could have spent many, many hours there, very happily. From the name, I was expecting something smaller — less bookshelf, more cafe. Way, way off. It was wonderful. I headed straight for the children’s section, of course. Lots of familiar titles, plenty of new ones. I was so sucked in that I didn’t even realize until I was heading back through the store that the YA books were in an entirely different area. So, of course, I had to detour through that section as well.

The person I had been told to ask for wasn’t in, but I was lucky enough to meet the owner, who was very helpful. And again, I’ll be following up with them later in the week. More on that later, probably.

So far I’ve visited five new bookstores in person over the past few weeks. Sometimes I’ve been lucky enough to make a connection with the right person at the right time, usually not. But without fail, the people in the stores have been helpful and receptive and given me directions for the next step. I have two workshops booked, and a few stores that have said they’re interested but haven’t yet booked dates. This is all a very new process to me, but I’m learning as I go.

That last one is especially important. You’re welcome.

Is it easy to try to organize bookstore visits? No, I wouldn’t say so, especially if you’re an introvert — and writers tend to be. I get these flashbacks to some of my more horrible, sales-related high school jobs. Cold calling, cold chills. But these are book people — these are my kind of people! And often there’s a moment of connection — the name of a favourite book, maybe, or a recommendation for my bookavore daughter (who is currently devouring a book that I bought her in Guelph). And then it doesn’t matter so much who’s standing where in the shop, because we’re talking about something that lights up book lovers on both sides of the counter.

So no, it’s not easy. And yes, I’ll keep trying. And if you’re a local writer and feel like coming along for the ride, please let me know!

Especially if you’re good with directions.