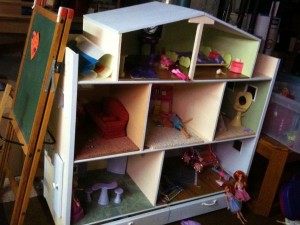 A few years ago, my dad built a giant Barbie dollhouse for Sarah. It’s three (Barbie) storeys tall and about four feet wide. It’s on wheels, and has little pull-out drawers along the bottom. The only possible place where it could fit in our house was the unfinished basement.

The thing is, a proper game of Barbies can take a long time. There’s no finish line.

A friend of mine with a daughter the same age was talking about this the other day… how she hates the games that don’t have “ends,” or the ones that take too long to get there. When they play Monopoly as a family, they stop after the last property is bought. We’ve been known to do the same. It has the added benefit of dodging the bloodthirsty stage of the battle, but the thing is, it cuts the game short.

And with the Barbies… well, when I do take the time to get into Sarah’s world and play with her properly, I enjoy it. And I wonder why I don’t do it more often. I wonder that until the next time she asks, when I have writing to do and an eight-foot-high pile of laundry and a gazillion other things that need my time and energy.

So chances are I tell her no. Or placate her with a shorter, simpler game. Because when I look at an activity, I want to know how big it is. I want to know how large a time slot I have to chunk out of my schedule. What’s the cost, in terms of minutes and hours?

I think it’s natural. Or, at least, it’s a learned behaviour, because Sarah does it too. When she comes across a tricky passage in a piano piece, she asks how many times she has to repeat it. “Until it sounds smoother,” I say. But that’s not what she wants. She wants a number. She wants me to say, “Three times, and it will be learned.” She wants a finish line.

But playing with my daughter isn’t piano practice. I’m not there with a goal in mind… unless that goal is to connect with my daughter and share something special together. To peek into her world as we build a story using twelve-inch-tall dolls with oversized chests, or plastic ponies that live in wooden stables. To listen and learn how she thinks. To make her laugh.

The best way to achieve that is to stop counting the minutes.

To write properly, you have to get into — really get into — a world. Let it evolve. And trust nature or instinct to tell you when to surface. It’s scary, because there’s something about this kind of writing that makes you vulnerable. But it’s worth it. Because when you stop counting minutes, and just spend time with your story, that’s when you get the good stuff.

It’s hard, sometimes, to fit that kind of a writing session into a week. Turning off email and Twitter helps. I want to say that it’s because my time is still sectioned off in chunks (so many hours until school pickup, so many minutes until the laundry is done), but that’s not really why it’s hard.

Even when time is not an issue, there’s a reluctance to engage. I hesitate. I do other things first. I love to write, but I’ll do a lot of other things first. Partly because of outside pressures and things other people want or need, partly because, well, that blank page can intimidate. It’s hard to open yourself up to something that has no finish line.

Once I start writing, I love it. I’m happy. I wonder why I don’t do it more often. Like I said, it’s worth it.

So is Sarah. I think I sense some “hard time in the Barbie dungeon” coming up in the near future.