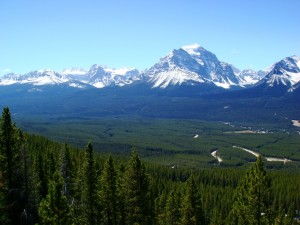 Everybody has one. That dream — that thing you’re going to do someday. I’m thinking about it this week for a couple of reasons.

The first is sad. My friend’s father died recently, and the funeral was last week. Mr. Moore was a wonderful, warm, caring man who had lost his wife a few years ago. The one regret he had, which was brought up at the funeral service, was that he always said he wished he and his wife had taken “that train ride through the Rockies.” They meant to do it, but the years slipped away, and then she was too ill to go.

My second reason is a happier one. Last Thursday was the five-year anniversary of my last chemotherapy treatment. I always count that date, and the anniversary of my last radiation treatment, as a milestone. Anyone who reads this who knows me already knows that six or so years ago, I won — or lost — the genetic lottery and managed to come down with three different kinds of cancer at once. If you don’t know, well, it’s not exactly a secret. Here’s the summary.

It wasn’t a great time; my daughter was very young, and I look odd without eyebrows. But I survived. I’m one of the lucky ones who gets a second chance.

The reason I’m talking about this is that during that eyebrow-free period of radiation and chemo and surgery and overall nastiness, it became perfectly clear to me what my train ride through the Rockies was. I didn’t even have to think about it. I desperately needed to raise my daughter. And I wanted to write books. Had things gone a different way five years ago, those would have been my two regrets.

And so as I was getting better and stronger, I made changes to my life. I arranged things so that I could spend more time with Sarah and Aaron. And I got serious about writing.

One thing Aaron said will always stick with me. He told me that to go through an experience like the one we did and not reevaluate, to emerge unchanged, was to do a disservice to the cancer. Now don’t get me wrong, I’m not out to do cancer any favours. We’re not buddies. But it was a force for change, and I have enough perspective now to appreciate that and be grateful for it.

And so I try not to put things off.

Mr. Moore’s funeral last week was a reminder to value what’s important, and to take the chances that present themselves — and when no chances present themselves, to make them. I don’t need to take a train ride through the Rockies. It would be lovely, but it’s not my dream. My dream is the life I have — spending time with my family and writing.

And so, hovering around the five-year anniversary mark of my eyebrow-free period, I am grateful for that.

What’s your train ride through the Rockies? How can you make it happen?

4 thoughts on “Train Ride through the Rockies”