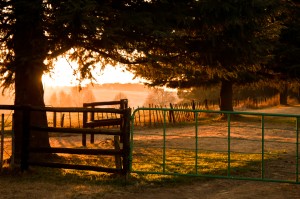 Three weeks ago, I tried something new. So far, it has stuck.

During the day, I’m editing a juvenile novel that I’ve been working on for some time. Okay, years. But I wanted to draft something new as well, so I decided to try morning writing.

That turned out not to be such a great plan. In order to function at that hour, I needed to be in bed by 9:00 or 10:00 at night. But late evening is usually the time that my husband and I have together, to talk or watch television without The Critter running around. Plus, my husband is a night owl. There’s no way on Earth he could shift his hours. So with my 5:00 a.m. start looming, I would traipse off to bed just after Daughter did, and he would be left behind looking forlorn.

I seem to be settling into a more modified routine now. I set the alarm for 5:45. When it goes off, I get up and go straight to my desk and write longhand until 7:00. So far, this seems to be working. I might even try backing it up to 5:30 and see how it goes.

I also came across a book called “The 90-Day Novelist.” Usually I ignore books with titles like that. I’ve worked on enough novels to know that imposing a time frame like that doesn’t pay off in the long run. Not for me, at least. Some stories take more time, some take less time. Most stories, for me, take quite a few drafts before I’m happy with them. Okay, years. So I’m not going to hold myself to the 90 days.

What I do like, however, is that there are writing exercises for each day. I do those each morning. And sometimes I add in something I picked up from Donald Maass or another resource, or sometimes I just take a stab at a scene or write about a character I’m trying to understand better.

I’m still in the pre-writing stage. That’s something new for me, too, and I think it’s going to turn out to be a good thing. I would usually think about a story for a long time, figure out who the characters were, and then start planning out a plot. Once I had that all set out on index cards, I’d start writing. By about halfway through, of course, things would have diverged so much from the original plan that my index cards were useless, but at least they’d gotten me into the story.

So far, though, I’ve spent three weeks not-writing the story. It’s weird. Instead, I’m writing every day about the story. Answering questions from the point of view of characters, developing the world, writing about whatever I want to explore. I’ve never done that ahead of time before. It all just happened alongside or in the messy first draft.

I’m impatient. I admit, I’ve taken a stab at the opening scene. I had to. There are also some little scenes and bits of dialogue that emerged out of the writing exercises, and I’ve tucked those away in case I need them.

I hope that, when I do start writing, I’m going to have a better first draft for having spent the time. For one thing, I realized that my main character isn’t who I thought it was going to be. That’s a good thing for the story, and will save me a rather large rewrite. For another, I have a much better feel for who all my characters are and what they want, and how those wants will bring them into conflict with each other and with themselves.

I’ve also taken some time to do things like drawing a map of my main setting, and studying floor plans from the late Victorian period (my story is set in 1910) to come up with a house layout. Setting details tended to shift around somewhat randomly in the first drafts of my previous novels. Distances varied according to how long I needed my characters to take to get places. Rooms could appear and disappear. I have a fairly nebulous relation to setting (and directions) in real life, so that shouldn’t surprise anyone who knows me. But I digress.

With this pre-writing, I’m not expecting a usable first draft. That’s not how I write. But I think that, because of having done this work first, I’ll end up with a first draft that has different problems than the ones I usually encounter. I have an idea of my beginning, and an idea of my end, and I know some things that happen in the middle. I haven’t got everything sorted out yet, but I’ve got different things sorted out from what I usually do. Writing from this starting point should be interesting.

So, as it turns out, this whole pre-writing thing has potential. I’ll know more once I start into the actual draft a week or so from now. I suspect that once I start writing the story, I’ll want to switch to typing rather than writing longhand (but maybe not — that might be an interesting experiment as well), and I’ll want to spend more time at it each day, so my schedule will need adjusting.

But I know now that I like working in the mornings. I like taking some time for writing when no one else is awake, and my brain isn’t full yet of all the things I have to do. And I like knowing that even if my day gets busy and everything goes down the drain, at least I did some writing before breakfast. I can hold onto that.

When do you write?