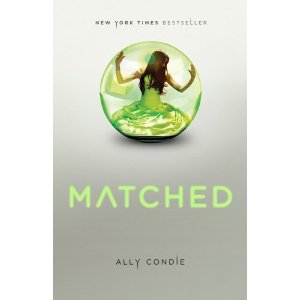 This is one of those books that I probably wouldn’t have picked up on my own. The girl-in-a-bubble cover is pretty, but didn’t grab me. Not sure why; it’s a great cover. It just didn’t look like my kind of book. But a few weeks ago, I had the chance to meet some book bloggers as part of a focus group at Penguin Canada. Almost without exception, they recommended this book. Now I know why.

Matched tells the story of a girl living in a society where officials decide everything from what you wear and eat to what jobs you’re most suited for and who you’ll marry. People are offered just enough choice (which colour dress would you like?) to keep them happy. To keep them complacent.

Cassia has always accepted the way things are. She has a moment of doubt when there seems to have been a mistake made over her perfect “match,” the man she’ll marry. She’s matched to two people, her best friend Xander, and Ky, whom she knows less well. The Officials assure her that Ky’s inclusion in the Matching Pool was a mistake. Because of his family history and social status, he’s not eligible to marry anyone.

Another thread of doubt comes from Cassia’s grandfather, who dies as society dictates, on his 80th birthday, but leaves Cassia something secret. Two poems. They’re not among the 100 poems that Society decided were allowed. These poems (Do Not Go Gentle by Dylan Thomas and Tennyson’s Crossing the Bar) are different. They stir something inside Cassia.

She comes to know Ky and what she learns of his history causes her to question everything.

I love Cassia’s growth as a character. I like the hints that we see of something under the surface that is not quite right. There’s no giant moment of revelation right away, just hints and small choices that built and build. The characters are well developed and the risks they take believable and frightening.

Ally Condie’s writing is clear and straightforward. The voice and observations she gives to Cassia ring true. My journey through the book was a little bit like Cassia’s journey — slow at first, and then faster and faster as the pieces started falling into place.

I’ll be eagerly awaiting the next book in the series.