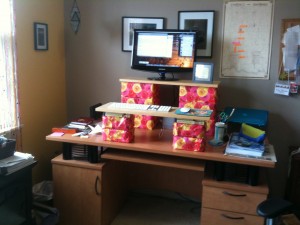 I’m trying something new this month. Following in the footsteps of Arthur Slade and many other writers, I’ve decided that Bum In Chair is no longer the way to go. I’m standing up to work.

There are supposed to be lots of health and energy benefits to this. It’s a bit soon for me to tell, but so far, I report no ill effects (at least, not once I caved in and started wearing shoes). I like standing up to work, when I think about it. Most of the time, and it’s only been a couple of days, I don’t even notice. Not once I get going, at least.

I didn’t want to make a big investment, and the jury is still out as to whether a treadmill desk is even practical for my office (although it would be really cool), but I used a couple of abandoned bookshelves and some cases of pop to bring my monitor and keyboard up to the right heights. I didn’t want to look at pop cans for the next few months, hence the wrapping paper.

And why, you ask, does a writer have spare bookshelves hanging around? I know, I know, it’s wrong. But here’s the thing. We had this cat. He was a wonderful cat, but he was nervous (he’d been bullied as a kitten, we think. These childhood traumas are difficult to overcome). And his nervousness came out in unfortunate ways. Like spray.

Too much information, you say? Yes, well. That happens on blogs.

Anyhow, this one bookcase bore the brunt of it. We loved him enough to deal with the constant clean-up, but I’m afraid there was no saving the bookcase. Still, the top shelves were fine.

But I digress. If you don’t happen to have a spare bookshelves lying around, I’m sure you can work something out with a lumber store.

The top of the monitor, apparently, should be about level with your eyes. A good typing height is when your arms are somewhere past ninety degrees. I dunno. Two layers of mini pop cans plus a couple of Jane Austen novels feels about right for me, and I’m five foot six. Not my favourite Jane Austen novels, obviously. Those ones, I need regular access to.

And there you have it. A homemade standing desk. It’s not very original, I’m afraid. You can find examples of this sort of thing all over the web. I like to think of the wrapping paper as my own personal touch, though.

Is it working? So far, so good. I like it. If you want to try it yourself, though, I recommend wearing a good pair of shoes. And buying a brand of pop that you won’t be tempted to drink.

Just for fun: my first attempt was with Lego. I couldn’t find enough of the really big-sized Lego, and it didn’t feel stable enough. But it sure was colourful. 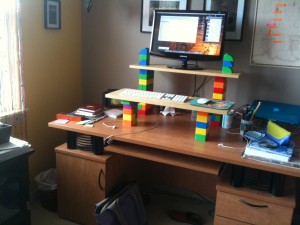 2 thoughts on “Standing Up”