Because we’re always buzzing about something?

No. I was actually thinking about that old saying about how a bumble shouldn’t be able to fly, but the bee doesn’t know that, so it flies anyhow. However, a quick Google search put paid to that theory. I’m going to write my blog post anyhow. 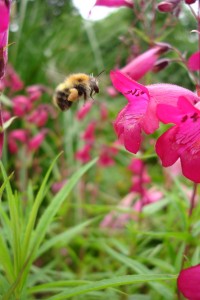 My writing group is big. Ten people, give or take, with sometimes a member or two on leave of absence. It can, at times, be hard to get a word in edgewise. Sometimes, when a lot of people have work ready to bring to the table, we have to schedule our critique turns months in advance. It should be cumbersome. It should implode.

So lately I’ve been wondering about that — about what makes a writing group work or not work. This is my second writing group. My first died of natural causes… six of us met in a writing course and decided to form a group. Over the course of a couple of years many of us moved away from the city, in opposite directions. Several of us had babies. The group drifted. I still adore them, and we still keep loosely in touch, but it just became impractical to meet up.

My current writing group, Critical Ms., has a fluid membership base. People come and go. Sometimes we have a waiting list. Sometimes we’re scrambling for members. Sometimes people leave, sometimes they come back. I think this flexibility is part of what has allowed the group to stay alive. It isn’t the same collection of people it was when I joined, but in all the ways that matter, it’s the same group.

We meet every second Tuesday. Same time, same place. We don’t change our meeting night if someone can’t make it. The group keeps going.

We each read the work being critiqued ahead of time. We each independently print off the pages and write comments on them, and usually write a sort of editorial letter to the author as well. But the magic happens at the meeting. Somehow, when those ten people around the table start discussing the work, ideas and insights arise that didn’t come from any one person at the table, but from the discussion itself.

Someone made a joke one week about the critique being greater than the sum of its parts. I’m not sure it’s a joke after all.

I don’t know if it’s the format that makes the group work. I think that’s part of it. I think that’s why Critical Ms. didn’t dissolve, like my first writing group, when the first members started to drift away. But that makes it sound like the group functions independently of the people in it, and that’s not the case.

The reason the group works is that we care. Every person in that room cares about his or her own writing, and cares about the writing of the other people in the room. We’re all committed to learning more about the craft. We all believe that writing works best when it’s not a solitary endeavour. We support each other… even when that support needs to take the form of (*ahem*) nagging. (That’s usually my job. I’m good at it.)

We critique thoroughly, but with respect. If one of us learns something useful or stumbles across a great resource or opportunity, you can bet that by the next meeting, we’ll all know about it. We celebrate each other’s victories. We secretly (editors, don’t read this part) boo each other’s rejection letters. Except the nice ones. Those ones count as victories, so we cheer those. Then we roll up our sleeves and get to work and figure out how to make the next submission count.

We’re choosy about who comes into the group, because this “play nice” strategy needs to be nurtured, but we each know that the group exists independently of any one of us. I think, in that sense, it becomes something of a privilege to belong. And maybe that helps us take the commitment more seriously.

I’ve been part of this group for a while now. Five years, maybe? I’m not sure. Some people have been there longer, others not as long. I missed some time when the whole cancer thing happened. Carole Enahoro, the woman who brought me into the group, flew off to England ages ago. A few times I’ve seen the group waver, and worried that even this solid little ship could shake apart, but somehow we always work it out.

When I joined Critical Ms., my writing life changed for the better. I started taking it more seriously. I learned a lot — so much — from the other writers in the group. I think that if and when you’re ready to get serious about your writing, the best step you can take is to find yourself a supportive, solid critique group. I’ll always be grateful to Carole for inviting me into hers.

If you can’t find one, make one — writing courses are a great place to find like-minded people, and CANSCAIP offers a bulletin-board-style page on its website for Members and Friends to post calls for writing groups. The Writers’ Community of Durham Region (WCDR) will be forming some kind of support system for starting up writing groups over the next year or so. Your local writing organization might have some kind of system in place as well.

Heck, you can use the comment space below to post a “writing group wanted” ad if you want, although you might do better on Twitter. There are online groups as well. That format didn’t work for me when I tried it, but for many people, it’s a great option. The important thing is that you find a group that supports and cares about what you’re doing.

I’d love to hear from you. Are you part of a writing group? Has it made a difference to your writing? How does your group work? And most of all, what do you think makes it fly?

4 thoughts on “How my Writing Group is like a Bumblebee”