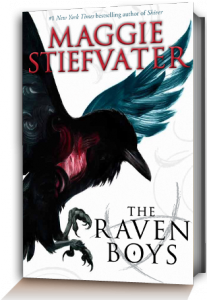 Today my friend Sue and I had a random meeting with Maggie Stiefvater! We were at Mabel’s Fables, one of our favourite children’s bookstores in Toronto, planning to look at books and then go for lunch together. On the way up the stairs, we noticed a beautiful new book poster on the wall — it had a raven on it.

It took me a moment to realize it was for a new Maggie Stiefvater book — I hadn’t realized she had one coming out. I love her books. I turned to Sue. “Do you think they’ll have it?”

Upstairs, we found a schmancy cardboard display stand filled with copies of her new book, The Raven Boys, each one sporting a ‘Staff Picks’ sticker. We each grabbed one and started reading the cover flap (after admiring the cover — it really is gorgeous. Kind of spooky and painted-looking).

A woman who works at Mabel’s came by and said how much she had loved the book. Scorpio Races is still her favourite Maggie Stiefvater book, but she really enjoyed the new one, too. I’ve been a Maggie fan since Shiver, so I was sold right then and there. Then, she casually mentioned that Maggie would be stopping by in about twenty minutes to sign copies.

Seriously? Maggie’s American — she lives in Virginia, I think she said. Not exactly a local author!

Sue and I very happily retired to a corner to gossip and wait for Maggie Stiefvater to appear. I had to work at disguising my fan-girly glee; I’m pushing forty, after all.

Maggie was lovely. It’s always nice when an author you admire is as friendly in person as you hope they will be. We each got a book signed (The Raven Boys for me, Scorpio Races for Sue), and took a photo with Maggie. It wasn’t her usual crowd of zillions; it wasn’t an official event, so there weren’t a lot of people there. Just us and the people from Mabel’s.

I felt very, very lucky to have the chance to meet her like that.

The Mabel’s staff, apparently, told Maggie when she arrived that she had two ‘lady-fans’ waiting upstairs. A polite way of saying that Sue and I are on the old side compared to the usual YA demographic. Works for us!

We talked a little bit about writing. Not much; I felt a bit self conscious about the whole thing, to be honest. She talked about world-building with Sue, and how important it is to know more about the world than appears in the book. For her, though, the story is defined by the characters. She isn’t planning a sequel to Scorpio Races, although she’d love to spend some more time in that world, because those characters are where they need to be for now.

That’s the story, so far, that’s closest to her heart. The one with the most of her in it. Which was interesting to hear, because that seems to be the one that resonates most with readers, as well. Something to think about, there.

I did manage to ask her what she likes to read — strong characters and a bit of magic, apparently. Not so much high fantasy anymore, although she used to read it. She loved The Night Circus. (Me too.)

Sue and I didn’t want to take up too much of her time; we went downstairs and then headed out for lunch. But I’ve been feeling bouncy all day, because authors are my movie stars and rock stars, all rolled into one. I’m grateful that both Maggie and the Mabel’s staff were so friendly and gracious, and that Sue and I had the chance to visit with her.

My daughter nodded solemnly and summed it up very nicely when I picked her up from school and told her about it. “It’s as if (name of Daughter’s friend) met Justin Bieber, right?”