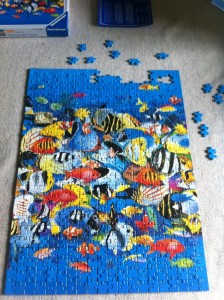 Remember that puzzle from last week’s blog post? Here’s what it looked like this morning. Actually, it looked a lot worse than this at one point. Like Jaws took a bite out of the top.

Lots more has been filled in, yes. But then I hit the hard part, all that plain blue near the top. And the pieces weren’t fitting. I had to go back and tear out some stuff that I thought was done — the frame. And believe me, when you think you’re that close to done, the last thing you want to do is go taking apart stuff you thought you had finished with ages ago. But sometimes you have to, in order to make it better.

The parallel to writing here is obvious. It’s a lot easier to work scene by scene, or line by line, and find the small changes that need to be made. And that will make the story better, yes, but maybe not as good as it could be.

I’m overhauling (editing isn’t a strong enough word) a juvenile novel that I’ve been working on for a couple of years. My cousin saw an early draft, since it borrows from a place that was important to us as kids. She liked it very much, and wants to know when that book will come out.

I doubt she’d recognize much of the current version. There are new characters. Some old characters are gone. Some play vastly different roles now, and much of the premise of the story has changed.

I’m okay with that. 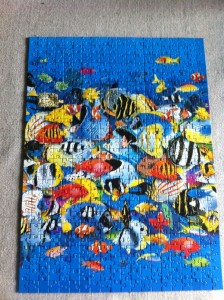 I hope it’s better. There were parts of the early drafts that just didn’t hang together, and I never did come up with an ending that felt right. If the roof won’t fit, sometimes you need to look at the foundation. (That may or may not be true; I don’t know that much about building houses. But bear with me anyhow.) So now I’m happier with the general structure of the story… I can see where it all needs to go, and its leading to a better ending than any of the previous versions have had. But in many ways, I’ve started from scratch. Some of those nice scenes that I edited and polished? Gone. I’m back to rough draft stage in a lot of places. Most of the book, in fact.

That’s all right. I’m willing to build it again from the ground up, to get it closer to where it needs to be. And I think I’ve learned enough about writing over the past three years that the new scenes, even in their rough form, read better than the old ones did.

It might have looked closer to “done” before, but when I got to that top row, the hard part, the pieces just weren’t fitting.

This time, I hope more of them will.

This week, I was going to blog about another bookstore-visiting trip. My friend Susan Blakeney helped me navigate the TTC to three more bookstores. But she has already blogged about it here, and I don’t have that much to add, really. (Except for one small correction —  I was pretty happy when we were given a referral from the first Type Books location. To my way of thinking, that’s a good outcome and something to follow up on. My reaction may have been slightly overridden by the how-the-heck-do-you-use-a-streetcar nerves, though, so I can understand why she thought that.)

Anyhow, for those of you who read to the end, here’s a picture of Sue and I on our day out.

2 thoughts on “Tearing out the Frame”