Saturday night my daughter was at Brownie camp. Well, she was, until about 10:30. Then we got the phone call to come pick her up. (Which, I might add, we were happy to do — I want her to know that she can always call home. It’s good training for when she hits those teen years.) Anyhow, she wanted to go back and join the other girls for breakfast and cleanup, which was how I happened to be in the Port Perry area with some time on my hands, in the quiet of a Sunday morning. 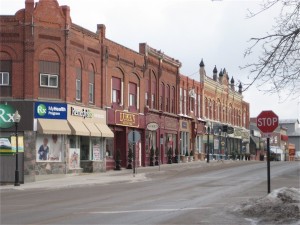 I love downtown Port Perry. Their history is still quite visible, and they work hard to keep it that way. So, while there’s no ignoring phone poles, street lights and parked cars, if you wander around at just the right time, you can get a glimpse of what the town used to be like.

It turns out that a wintery Sunday morning, while stores are still closed and cars are scarce, is one of those times.

I have a couple of historical novels in the works, so I set out to collect some pictures. The ones from the camera don’t match the ones in my head; they never do — I’m just a point-and-shoot photographer. I don’t know how to make the picture capture the scene. But they help me remember, at least. I can take it from there.

Some things I liked: the downtown. Little shops all in a row, with brick-faced living quarters above and false fronts. I could tell, because I looked from the side and saw the wooden beam propping one of them up. Very cool. I remember one of my English professors talking about the “false fronts” in a CanLit novel, and how symbollic they were. Fair enough. For me, they bring back memories of childhood ballet classes in a second-floor studio in Whitby’s downtown. Looking across the road from Miss Inta’s class, I could see how the brick was built up in front of the roofs. I liked the way it looked, like a secret hiding place.

I spent a lot of time looking out those windows. It may explain why I was never any good at ballet. 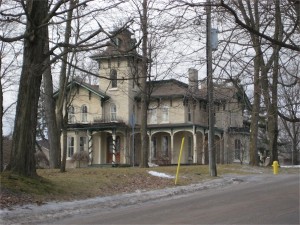 I like the old houses. I’ve been looking at old houses a lot online, recently, trying to find ones with lots of pictures and with sketched-out floor plans, to help figure out the details for a book I’m drafting. “Big house” isn’t specific enough when you’re writing about the people who live in it — you have to know where all the doors and stairways are. But looking at a picture on a computer screen isn’t the same as walking through an old part of town, feeling how many steps it takes from one old house to another, figuring out what the spaces would have been.

I took pictures of several of them. If I took a picture of your house, please don’t be worried. I’m not stalking you, and I’m not casing the joint. I just think you have a pretty house.

I like the town hall. It’s a funny, skinny building, beside an equally skinny church. They’re like a pair of bookends, across a street from one another. And the town hall has some schmancy brickwork near the top.

I like the spot where I had breakfast (a hot-crossed bun and some orange juice from a grocery store that miraculously happened to be open). Four benches, at corners around the frozen bit in the middle. It would be nice if it were a pond, but I suspect it’s just some low ground, puddled over. I’ll go back in the spring to check. 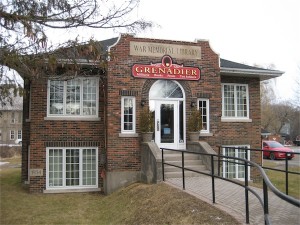 This war museum library (currently a shop for war-related books and so on, I think) made me sad. It’s dated 1932. The people who built it thought the Great War was behind them, and had no idea what was around the corner. But I do like the idea of a library as a memorial.

There’s a miniatures store in downtown Port Perry. Tiny little models of victorian houses, and everything you could want to put in them, from furniture to dogs to teeny napkins and cans of baked beans. It’s a bit like what I’m trying to do — build an imaginary town and get all the pieces right.

It was early enough that the streets were nearly deserted when I got there. As time passed, people started flocking to church and the bells rang. I lost that feeling of having the place nearly to myself, but people-watching is fun, too. And then it was time to head back and pick my daughter up from camp.

On the way home, we stopped so I could take some pictures of a crumbling farm. Not so much because it was crumbling, as because I wanted to see where all the buildings were in relation to one another. Then there was a lovely stone farmhouse that I couldn’t resist. I pulled over again.

Sarah asked if this time, I could stay in the car to take the picture.

2 thoughts on “Nosy Writer with a Camera”