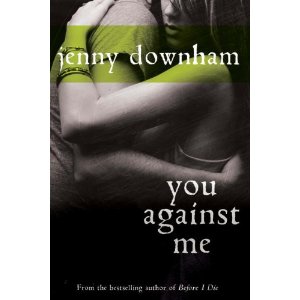 Doubleday sent me a few books to review, and since this one had the earliest release date, it was at the top of the list. But once I cracked the spine that wouldn’t have mattered.

The narrators’ voices and the situation grabbed me from the beginning. I’m a sucker for a good voice. The only reason I didn’t devour the book in a day is that it wasn’t an option this week.

Also, I had to wrestle it back from my friend who picked it up on the weekend and started reading it. She made me promise that she gets it next.

Nothing about this book is easy. Mikey’s sister Karyn claims a boy assaulted her. She is depressed and afraid to leave the house. He struggles to look after their younger sister and alcoholic mother and keep things together, hiding the truth about their situation from social services, while keeping up his job at a local bar. He doesn’t know what the answer is, he just wants to fix things.

Ellie worships her older brother, Tom, so of course when he’s accused of sexual assault she supports him. Karyn was at a party and drank too much; she made a decision and then changed her mind. She has no right to ruin Tom’s life. But as Ellie comes to know and care for Mikey, she struggles with decisions that will shape the future of her family.

Everything about this book is beautifully handled. The voices are real and the language is breathtaking at times. Downham does credit to the long, often painful processes involved in any legal inquiry or battle. Both characters grow up throughout the course of the novel, and the ending does credit to the characters’ journey without attempting to wrap anything up in an easy package.

If I have one quibble (and it’s a small one), it’s that I wasn’t sure of Mikey’s age, or even age range, for the first chapter or so. I was consciously trying to figure out whether he was older or younger than Karyn, whether he was 12 or 16 or 20. It became clear soon enough, though, and from that point on it was smooth sailing. There is also a bit of awkwardness later in the book, where Downham needs weeks to pass (e.g. between hearing and trial), and uses brief, unrelated scenes to mark the passage of time. It’s over with quickly, and completely forgivable.

You Against Me is an insightful, compelling  novel for older teens. It deals with difficult situations and shows that both sides of any given story have their own truths. I haven’t read Downham’s Before I Die, but after this, I intend do. I suspect she’ll be taking her place on my favourite authors list.

One thought on “Book Review: You Against Me”