I don’t keep up on Twitter very well. I follow too many people. When I’m away for a few hours (say, writing) I end up scrolling past a great number of comments that I’ve missed. Every now and then, though, a combination of words will hit me between the eyeballs and make me want to click.

YA Mafia, it turns out, is such a word combination.

The YA Mafia is apparently a collection of high-powered YA writers who will use their influence for nefarious purposes such as anti-recommending writers who cross them. You can read rebuttals of it here (Justine Larbalestier) and here (Holly Black).

This made me laugh. I don’t know a lot of high-powered writers. Lots of writers, yes, but few in the same stratosphere as Holly Black. Still, I’ve had my share of ga-ga moments with Canadian writers whose books I loved… silly, fangirly moments like “Omigod, that’s Jean Little over there,” or “I’m sitting on a couch, at a party, with Barbara Greenwood!”

I’ve shared pizza with Arthur Slade and it’s possible that, due to large ocean waves and faulty bathing suit construction, Kathy Stinson and I may have seen more of each other than is entirely proper. All of these are people whose books I love. And without exception, every one of them has been friendly, kind and supportive.

I was talking about this with a librarian the other day. I can’t remember how it came up, but she was surprised to hear the extent to which writers help one another. I can’t vouch for the grown-up writers. But in Canadian children’s lit, I have never had a bad experience.

Some examples: just today, I emailed Arthur Slade to ask a really stupid question about dairy cow farming. I had misremembered. He grew up on a ranch, not a dairy farm. Still, he took the time to pass my question along to his father and to write back with an answer. He even included this picture. 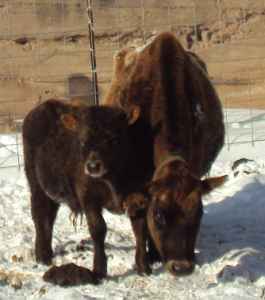 Cute calf, isn’t it? I think I shall name it Arthur.

A few months ago, at my publisher’s Christmas party, I met Barbara Greenwood. Yup, that was the couch incident. And once I got over my tongue-swallowing and managed to talk with her, I was amazed by how gracious she was. Not gracious like the queen, although I think in my mind she should be wearing some kind of CanLit crown. Gracious and approachable and friendly.

We talked about a time period I was researching, and she mentioned reading several mystery novels set in that time. Later, I followed up by asking her if she could recommend one or two. She send a two thousand word email listing a dozen different series and giving me specific suggestions within each.

And when the time came to paint Cheryl Rainfield’s apartment and help her move, who was there? Yup–fellow writers. We swapped rollers and book recommendations.

This is what I’ve come to expect from my fellow writers. Friendly faces. A general acknowledgement that we’re all in this business together and while it isn’t always easy, it is rewarding. A shared passion. Joy over one another’s accomplishments. Help when asked or needed. And I always, always try to offer the same.

So if there is a YA Mafia out there… let’s just say that to me, it sounds more like somebody’s novel premise than like an actual snapshot of the world of children’s writing. I might be just getting started, but I know I’m proud to be part of this group.